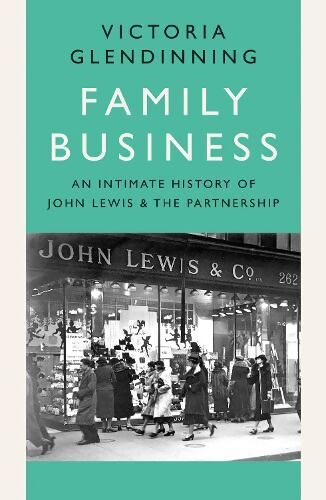 From Victoria Glendinning, winner of the Duff Cooper Prize, the James Tait Black Prize and (twice) the Whitbread Prize for Biography.
'It's Succession in tailcoats and spats ... This is a vivid and eye-opening group biography, backgrounded by the rise of supermarket moguls from humble beginnings' Sunday Times
Who was John Lewis? What story lies behind the retail empire that bears his name? Behind the glass windows and displays of soft furnishing, this book reveals the family that founded the shops in all their eccentricities, and whose relationships became blighted by conflicts of epic proportions as their wealth bloomed.
Born into poverty, John Lewis was orphaned at the age of seven when his father died in a Somerset workhouse. Dreaming of a better life, the young man travelled to London at the start of what would become a retail revolution. From early years as a draper's apprentice, we see how Lewis's first pokey little business opened on Oxford Street in 1864, and expanded as an emerging middle class embraced the department stores as a recreational experience.
Prize-winning biographer Victoria Glendinning has had full access to the company and family archives to write this eye-opening story. She captures the toxic relationships that unfolded between Lewis and his two sons, Spedan and Oswald, as they collided over the future of their retail empire - their worst moments including emotional blackmail, face-slapping and a kidnapping - and much litigation between father and both sons.
Yet the family never broke up and Spedan's vision of a Partnership model to act as an ethical corrective and foster a community of happier, more productive workers was eventually realised and survives to this day.
With riveting personal detail, this brilliant group biography captures a rags-to-riches story and a tempestuous family saga, all unfolding against the dramatic social and political worlds of nineteenth-century London. The book concludes with an assessment of the position John Lewis holds in British sensibilities, and whether John Lewis and institutions like it have a place in our future.

'The store that changed shopping was built by a dynasty whose secrets, fights and feuds would have made gripping TV drama ... Victoria Glendinning is an eminent literary biographer whose subjects include Vita Sackville-West and Edith Sitwell. So what possessed her to write about a 157-year-old commercial enterprise famous for affordable haberdashery, wedding-list glassware and cute Christmas TV commercials? The answer lies in the subtitle: Glendinning's story of the Lewis dynasty is extremely "intimate" - a saga of family fights and obsessions, epic stand-offs and wild ambitions, stressed-out womenfolk and unhappy children. It's Succession in tailcoats and spats ... This is a vivid and eye-opening group biography, backgrounded by the rise of supermarket moguls from humble beginnings'
John Walsh, Sunday Times
'You'll never look at John Lewis in the same away after reading this compelling survey of the family behind the department store ... Glendinning's fascination is contagious, and she blends in the ingredients of a family saga with insights into the partnership's ethical underpinnings, acknowledging the romance of golden-age bricks-and-mortar retail as well as its uncertain future'
Observer
'She brings the Lewis family to life with wry commentary and telling detail'
Financial Times
'Lucky John Lewis. As company histories go, nobody could wish for a more skilful chronicler than Victoria Glendinning, who has a slew of biographies to her name. She calls her work an 'intimate history', and indeed it is full of domestic rows, curious relationships ... [It offers] careful documentation of a remarkable retail experiment'
Literary Review