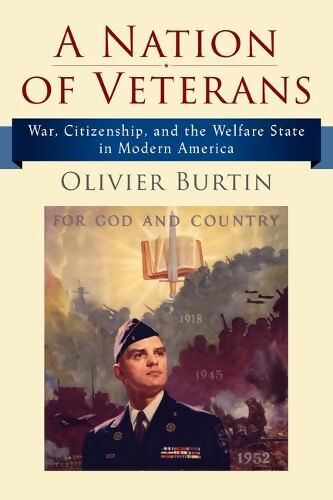 A Nation of Veterans examines how the United States created the world's most generous system of veterans' benefits. Though we often see former service members as an especially deserving group, the book shows that veterans had to wage a fierce political battle to obtain and then defend their advantages against criticism from liberals and conservatives alike. They succeeded in securing their privileged status in public policy only by rallying behind powerful interest groups, including the Veterans of Foreign Wars, the Disabled American Veterans, and the American Legion. In the process, veterans formed one of the most powerful movements of the early and mid-twentieth century, though one that we still know comparatively little about.
In examining how the veterans' movement inscribed martial citizenship onto American law, politics, and culture, A Nation of Veterans offers a new history of the U.S. welfare state that highlights its longstanding connection with warfare. It shows how a predominantly white and male group such as military veterans was at the center of social policy debates in the interwar and postwar period and how women and veterans of color were often discriminated against or denied access to their benefits. It moves beyond the traditional focus on the 1944 G.I. Bill to examine other important benefits like pensions, civil service preference, and hospitals. The book also examines multiple generations of veterans, by shedding light on how former service members from both world wars as well as Korea and the Cold War interacted with each other.
This more complete picture of veterans' politics helps us understand the deep roots of the military welfare state in the United States today.

A Nation of Veterans completely recasts the history of veterans' politics and benefits in the United States. While historians have long explained the remarkable success of the GI Bill and the Veterans Administration's vast post-WWII programs as easy political consensus, Olivier Burtin shows us they are the result of hard-fought political struggle and by no means foreordained. From the interwar years through the 1960s, a highly mobilized, multi-layered veterans' movement fought off critics and doubters to build a vast, exclusionary support system for mostly white male veterans. And while the veterans' movement itself declined in the 1970s, martial citizenship and military welfare lived on, stronger than ever. A Nation of Veterans is a book historians of war and welfare must read. * Jennifer Mittelstadt, author of The Rise of Military Welfare State *
In this original, surprising, and compelling new book, Olivier Burtin reveals how America's veterans built one of the nation's most powerful social movements to create one of its most generous welfare systems. Based on exhaustive research and written with elegant prose, A Nation of Veterans offers a provocative and thoughtful perspective on the vast extent of America's warfare state. * Andrew Preston, author of Sword of the Spirit, Shield of Faith: Religion in American War and Diplomacy *
Why does the United States have a separate-and more generous-welfare system for military veterans? Why are veterans' benefits widely understood as the nation's payment of a 'sacred and inviolable debt'? In this carefully researched and clearly argued work, Olivier Burtin offers an historical answer, one grounded (as good histories so often are) in contingency and in conflict. A Nation of Veterans is essential reading for anyone interested in American social policy or civil-military relations in the United States. * Beth Bailey, author of America's Army: Making the All-Volunteer Force *