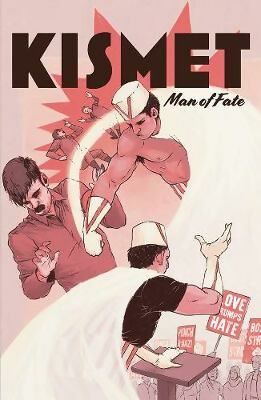 Kismet was the world's first Muslim superhero, making his debut in "Bomber Comics" in 1944. However, after only four issues, the character disappeared for over sixty years. That is until writer and religious studies scholar, A. David Lewis, (The Lone & Level Sands, A New Kind of Slaughter), brought the hero to the modern age in short story published within the Broken Frontier anthology (published by A Wave Blue World, 2016).

In his first featured graphic novel adventure, Kismet finds himself transported to our time with no memory of how he got here... or why. Set after the Boston Marathon bombing, and leading up to the 2017 presidential election, Kismet struggles to find his place in the modern world? Yes, they are facing many of the same threats he fought against during World War II, but that doesn't necessarily mean they need the same hero. Even someone with superpowers can't force together a country divided or punch away a threat that's coming from within their own political system.

Kismet ditches the cape and instead tries to inspire a movement of political action coming directly from the people. Instead of fighting bad guys, he makes speeches, attends the Women's March on DC, and even goes on daytime talk shows. But inevitably, it's his inaction that costs him the most. Kisment witnesses a bank robbery and refuses to intervene, losing the good faith of the people. To fill this void, a new hero steps in, Steampunk, and saves the day.

Kismet begins to doubt the reason for his very existence.

It's at that time that Steampunk comes to his side. Together they work toward a common cause, unraveling the plot of an enemy who's been pulling the strings from the beginning. Once considered an ally, Omar wants the power of Kismet's cape, the mystical "fatecloth", for himself. He almost succeeds but the fatecloth deems him unworthy and Kismet reclaims the mantle. A hero's journey is never easy, but he's here for a reason... to serve the people any way he can.