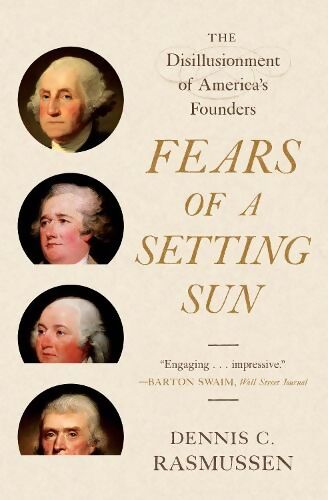 Fears of a Setting Sun

The surprising story of how George Washington, Alexander Hamilton, John Adams, and Thomas Jefferson came to despair for the future of the nation they had created

Americans seldom deify their Founding Fathers any longer, but they do still tend to venerate the Constitution and the republican government that the founders created. Strikingly, the founders themselves were far less confident in what they had wrought, particularly by the end of their lives. In fact, most of them-including George Washington, Alexander Hamilton, John Adams, and Thomas Jefferson-came to deem America's constitutional experiment an utter failure that was unlikely to last beyond their own generation. Fears of a Setting Sun is the first book to tell the fascinating and too-little-known story of the founders' disillusionment.

As Dennis Rasmussen shows, the founders' pessimism had a variety of sources: Washington lost his faith in America's political system above all because of the rise of partisanship, Hamilton because he felt that the federal government was too weak, Adams because he believed that the people lacked civic virtue, and Jefferson because of sectional divisions laid bare by the spread of slavery. The one major founder who retained his faith in America's constitutional order to the end was James Madison, and the book also explores why he remained relatively optimistic when so many of his compatriots did not. As much as Americans today may worry about their country's future, Rasmussen reveals, the founders faced even graver problems and harbored even deeper misgivings.

A vividly written account of a chapter of American history that has received too little attention, Fears of a Setting Sun will change the way that you look at the American founding, the Constitution, and indeed the United States itself.

"A Wall Street Journal Best Politics Book of the Year"
"A World Magazine Best Book of the Year"
"Very illuminating. Much recommended."---Jamelle Bouie, New York Times columnist
"An astute discussion of the American founders' suspicions that the republic they had created wouldn't, in the end, make it. . . . Gracefully written and fair in its judgments. . . . Timely."---Barton Swaim, Wall Street Journal
"Written in simultaneously accessible and brilliant prose, Rasmussen crafts a flowing narrative built on the writings of the founders themselves. This narrative is further illuminated by his commentary and mastery of the secondary literature. This book can (and should) be enjoyed by nonspecialists, but this does not diminish the originality of the work."---Kenly Stewart, Los Angeles Review of Books
"Fascinating."---Steve Donoghue, Christian Science Monitor
"An illuminating account of how the founding fathers worried about the future of America. . . . This standout history provides useful context for understanding the roots of contemporary political turmoils and may comfort those who fear that American democracy is in dire peril." * Publishers Weekly, starred review *
"Making the striking argument that all but one of the major founders of the U.S. died disillusioned with their creation, Rasmussen nevertheless offers hope for our current predicaments . . . an authoritative and convincing argument in disarmingly artful prose." * Kirkus Reviews *
"Rasmussen has produced a well-researched study that is a salutary read. He writes accessibly, explaining what motivated and worried each of [the founders]. Concern for future generations and the fate of the republic is a recurring theme, and will also resonate with many readers today." * Library Journal *
"Magisterial . . . creative and thought-provoking at every turn . . . a delightful book. . . . Rasmussen has superbly placed the story of the Founders' growing ideological concerns about their creation in the context of their own often eccentric personalities."---John O. McGinnis, Law & Liberty
"On my history book of the year short list."---Marvin Olasky, World
"Drawing on reams of personal correspondence between the Founders, Rasmussen persuasively argues that the vast majority of America's Founders-including the likes of Washington, Adams, Hamilton, and Jefferson-went to their death beds disillusioned with the political order they had created."---Thomas Koenig, The Dispatch
"Very timely . . . a fascinating and completely new perspective on the Founders and their view of the country they helped create . . . highly engaging and thought-provoking, showing the very human side of politics in early America."---Jerry D. Lenaburg, New York Journal of Books
"Compelling and compulsively readable. . . . In putting leading founders' disillusionment with the Constitution at the center of his thoughtful scholarly analysis, Rasmussen vividly brings to light the fact that the founders themselves were often the Constitution's most perceptive and powerful critics."---George Thomas, American Political Thought
"Rasmussen's book also offered me some new insights and interesting facts. . . . Fears of a Setting Sun helps in understanding some of the roots of our contemporary political struggle and the fear of the decay of American democracy."---Pia Herzan, H-Soz-Kult
"Fears of a Setting Sun is an engaging, indeed fun, read, nicely written and deftly argued. More than that, it is a useful reminder at this political moment that while things ain't what they used to be, they never were in the first place."---Steven Conn, Origins